The Sphinx and the Crocodile 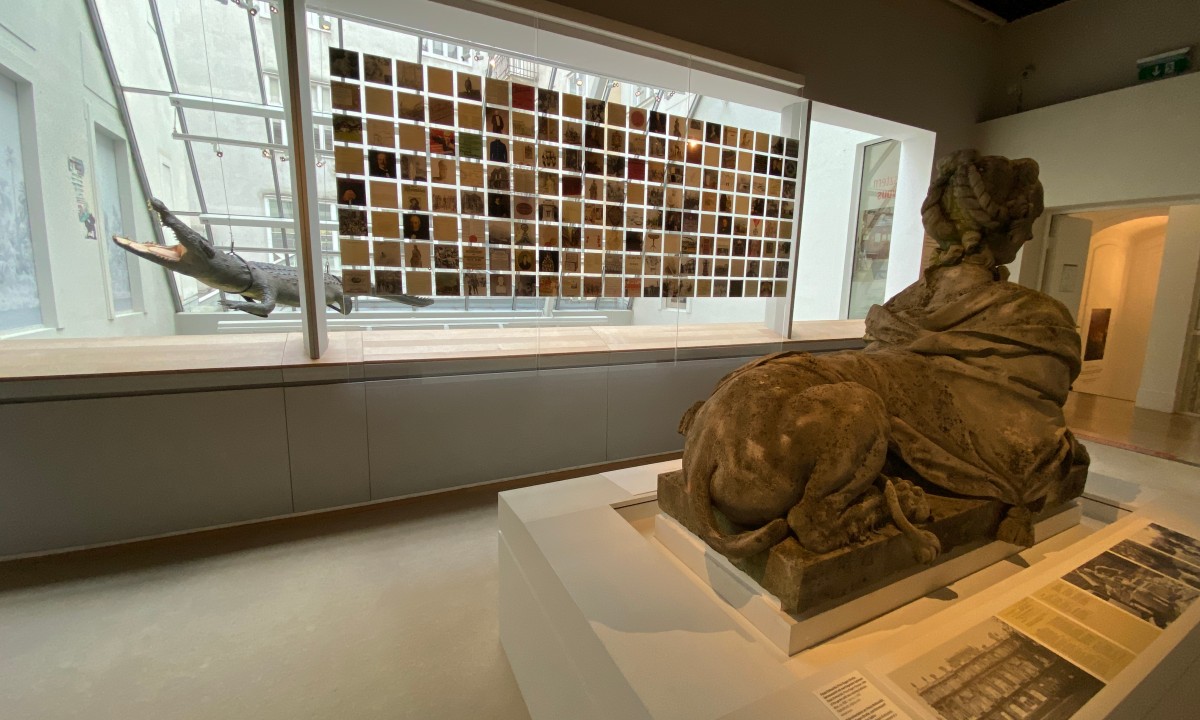 © Jüdisches Museum Wien
Madam, how is actually your mood, considering that you keep smiling constantly?

How should my mood be? Fair to midland, rather midland.

Even though you’re in a museum?

At least that’s an advantage. You’re not so exposed to the weather.

But were you always exposed to the weather, weren’t you?

Where do you want to know that from? When I can’t even remember myself. Or not so exactly anymore. And, unfortunately, you don’t get any younger either.

And that thing about age is true in any case. I’m probably a little younger than you, but I can already feel it in my bones, even if I don’t have them all anymore. But let’s get back to your mood.

It’s bad. Downright miserable. Because everything is gone. The memory of my old life, the one I led before the moment when I was taken to a garden in Liesing. Us. There are two of us.

And did both of you smile? 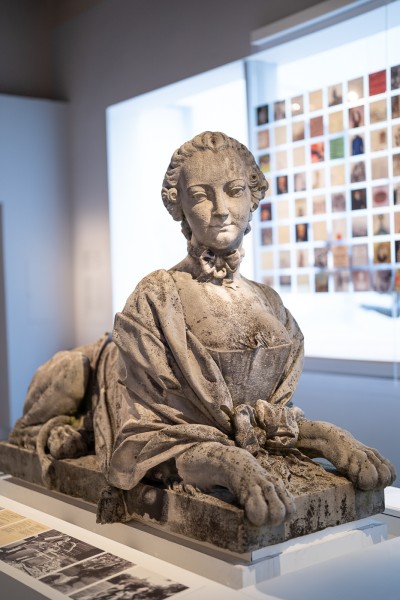 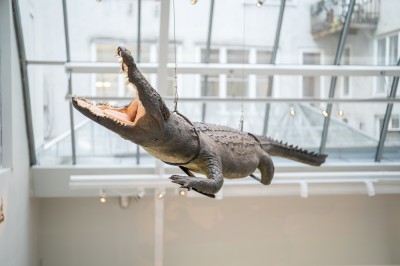 © David Bohmann
Of course. Otherwise, none of this makes any sense. But how do you know I’m smiling? I’ve turned my backside towards you and it certainly isn’t grinning at all. Where are you anyway? And with whom do I have this rather dubious pleasure?

Well, that’s easy to explain. We’re both in an exhibition at the Jewish Museum Vienna. You can hear a lot around there. It’s about the Viennese Rothschilds; it seems to be a crime thriller. I really don’t feel like smiling much, because I’m hanging in the museum sky with my mouth wide open and I’m missing a considerable piece of my left hind leg.
Oy vey! I’m not missing a leg, but rather my memory. How is yours doing?

Quite well. But not so much has happened in my life. I swam around in a presumably African body of water until the Rothschild family went big-game hunting and shot me. Maybe it was Louis.

Very. Today we see it more critically. But there are still people who attack us.

Go on. How did you get here now?

I lived in the Natural History Museum in Vienna for the longest time.

Unbelievable! Were you exhibited there?

Not really, at least not to the public. I hung in an office. I don’t know all the details, but I was given as a gift to the Natural History Museum. To be honest, I had forgotten that, but the curators from the Jewish Museum Vienna did a lot of research and searching for the Rothschild family when they were planning this exhibition. And then found some things.

Rothschild? Rothschild! That sounds kind of familiar to me. As if I had heard that before. Back in the day.

Everything here in this exhibition has to do with the Viennese Rothschilds, who actually came from Frankfurt, but also lived in Paris, London and Naples. And, naturally, in Vienna.

That’s very confusing! Can you be at home in so many places?

I think it’s not that difficult. It probably just turns out that way. In Vienna there were mansions, banks, hospitals, railroad lines, gardens and even a soccer club associated with the Rothschild family. Not to forget the art. They liked to collect a lot.

Palais. P a l a i s. There was also a garden there. Yes. On the back side. And we were there for quite a while.

See, it’ll be fine, the memory will come back. By the way, I would recommend that you listen when tours take place here.

In the best case, yes. Anyway, I’ve heard a lot. If it was Louis who shot me, he sat in prison for 14 months.

What did he do wrong?

Nothing at all. The Rothschild family was Jewish. That was reason enough.

I can’t believe how stupid that is! It’s like getting arrested for my hairstyle?

Something like that. Aside from your hairstyle: You are a woman in front and a wild cat in the back, maybe a lioness, that would certainly have confused the people in charge back then. You would probably have been arrested, too.

Let’s leave that now. So, you think listening could help my memory?

Yes, in any case. You only see what you know. You’ve forgotten a great deal so that you can’t see too much anymore. But I’m sure that you’ll find out where you lived, where the palais with the garden in which Louis also lived was.

Who might have shot you? So why are you actually blathering on about it?

Lovely of you to say that! We’re usually either nasty or vicious, annoying or sneaky. This is also the case in puppet theater. Very annoying. But Heinrich Heine already knew that people are sometimes worse than monsters.

So, you don’t feel like playing the monster anymore?

Exactly. I now let the guests in the exhibition look into my throat. And I notice how they start to think. About me. And perhaps about themselves. About the current monsters.

Do you really believe that?

I hope so. Exhibitions are made for that too, right? To contemplate about things.

I’ll prick up both ears in the future.

Go ahead. And we’ll talk again some time, okay?